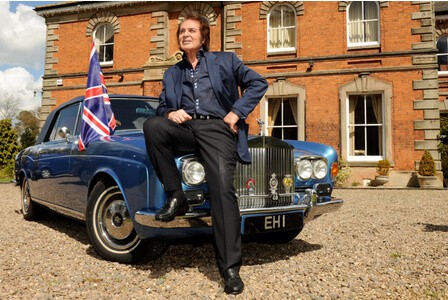 70s crooner, Englebert Humperdick (whose name comes from the Austrian composer of Hansel & Gretel) is regretting having lost the details of a wealthy Arab who spotted the singer’s car parked outside the Savoy hotel in London and offered to buy his personalised registration, EH 1.

‘The Hump’ finished, for the UK, in lowly 12th position,with just 25 points, at this year’s Eurovision Song Contest with the song ‘Love will set you free’. He says that the gentleman saw the coveted private number plate on the singer’s Rolls Royce when it was parked and approached him, wanting to buy it. Englebert Humperdick (born Arnold George Dorsey, one of 10 Anglo/Indian siblings, in Leicester) had a string of hits in the 1970s with ‘Spanish Eyes’, ‘The Last Waltz’ and ‘Release Me’. The hapless Hump lost the Arab gentleman’s details, however, so he is appealing for the man to come forward so that the sale can go ahead. He said ‘I don’t want to disappoint him’.