Secure their Future with a Private Car Registration

Expecting a child this year or know someone who is? Here’s why a DVLA personalised number plate is a good investment.

Whether you have thought about private number plates as an investment opportunity or not, more and more parents are choosing to invest in a private number plate, instead of opening ISA’s or personal savings accounts for their children. When some parents were asked of their reasons why they felt the need to invest in a special registration numbers, they saw it as a good long-term investment and felt they would get more of a return for it than any interest added to a bank account.

Whether we know about the investment opportunities connected with owning private number plates or not, most of us simply want a registration plate because it’s a fun way of accessorising your car. You can pick a named plate or choose a private plate which holds a special number, or you could choose a cheap dateless number plate which will disguise the age of the car.

We asked a few of our customers why they bought number plates for their children and here is what they said:

Mick Hunt – “Numberplates don’t depreciate in value and I bought my daughter one so this investment can look after her in the future”
Janice Looley – “I used to work in Banking for a few years before I relocated. I saw peoples’ investment flunctuate all the time and it was disheartening to see the older generation not getting the return they were initially promised. A colleague to me about numberplates so I invested in one using my son’s initials ‘OL’ and added the Number 1. It was pricy but I feel confident it will put in him good stead should he wish to sell it in the future”

Bal Singh – “I bought private plates for both my kids. I would rather put money in there than in Indian gold or property in the UK. My cars also look good on the drive in the meantime!”

Valerie Van De Clare – “My husband is in the car industry and he has always maintained that car registrations look after you going forward. He bought his private plate in the 70’s and he checks the value each year, and just beams. He will not tell me how much it’s worth, haha… however he bought them for our children”

David Charlie – “No brainer really. Private number plates look after you, just choose wisely and seek help from the experts if you’re unsure where to begin”.

Heather Logan from Cleveland bought GO12 DON for her husband as a birthday gift. They already own seven other registrations including 33 HL and 33 GL but Mrs Logan couldn’t miss the opportunity to buy her husband’s name on a plate. 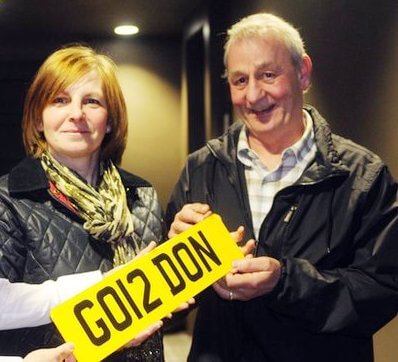 “If there’s something you want in life, and you can afford it, then why not go out and buy it. We think of them as investments.” said Mrs Logan.

Britishcarregistrations.co.uk has an easy-to-use search facility online where you can search for personalised number plates quickly. All you need to do is enter your special details – initials, dates, name and all the options will come straight up.

It’s not only individuals buying private and personalised car regs, there has been an increase in businesses purchasing plates to help drive the advertising and marketing for their companies. In some cases, they buy multiple plates for their whole fleet of cars.

A pest control company in Sussex recently bought – M1 CES, L1 CES, M1 TES, ANT 7T, A3 FLY and W4 SPS amongst others, commanding a current value of £55,000. David Sankey said “I would like it if eventually someone bought the whole lot from me.”

New Reg as an Investment Opportunity

Overall, British Car Registrations do advise people to consider registration plates as an investment. You could put spare money into a savings account, but with interest rates so unpredictable, it is highly unlikely you will get a return on the money.

Any investment requires a tough decision – just think about gold and property investments. These used to be very lucrative products to invest into in the past, however now prices tend to fluctuate considerably.

Private and personalised number plates are a very safe bet, which is why many people are investing in them these days. The market for private car regs is always solid – they retain their value and some also increase in value.

Top Tip: when looking to invest, common names will always be sought after plates. Buying and enjoying a named plate means that if an actor, sports player or another public personality comes into the limelight, imagine how much you will be able to save the plate for? For example, can you imagine the value connected with ‘Mr H Potter’ if he had bought a plate before the Harry Potter phenomenon hit the world.

If you already own a private plate and you want to know its value, British Car Registrations offers a free-no obligation valuation selling service.

Tagged with: Investment
Posted in News